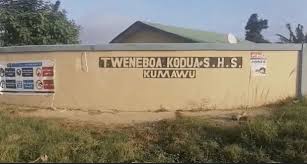 Investigations have started in the school after some allegations were leveled against the Headmaster, Mr. John Asante, for being too strict during the supervision of their first paper.

While demanding the dismissal of the headmaster, they also alleged that Mr. Francis Awuah has been manhandling some students and teachers during the exams.

In accordance with a video sighted by myshsrank which has gone viral, some students were seen lamenting and protesting in the dining hall, making claims that the school wants them to get F9 which is unacceptable.

The students refused to eat and intended to boycott the second phase of the exams.

Police were later called in to restore calm as the protest nearly halted the Paper 2 of the Integrated Science exam.

It took the intervention of both political and traditional authorities to restore calm and get the students to rescind their decision.

The confusion also caused the writing of the second part of the paper to delay.