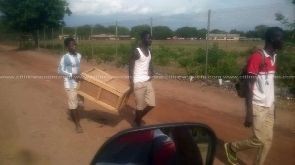 Final year students of Bimbilla Senior High School in the Northern Region were given just 30 minutes to pack out of the school for good after their final paper in the West African Senior School Certificate Examination (WASSCE) on Thursday.

There was heavy police and military presence at the school to enforce the directive.

The school’s headmaster, Mohammed Yakubu Mustapha, said he was worried the students had planned to attack teachers and destroy school property.

“We gathered some intelligence that they wanted to destroy government property and life. There were some particular teachers, including the headmaster, which they said they would kill. So definitely, my duty as a head in this school is to protect the school property and those working around. I informed the Municipal Chief Executive and the security forces to ensure that nothing untoward happens.” he told Citi News.

In justifying the move, he noted that a fight that ensued after a football match last Sunday led to the damage to roofs of school property.

Some final year students who spoke to Citi news appealed to authorities to allow them to stay on campus, explaining the curfew in the town would make it impossible to get their destinations on time.

But Mr Mustapha said: “we are choosing between two evils. The lesser and the bigger evil of protecting the whole school community and they also going into town to sleep.

Despite the security presence, some of the students still went ahead and destroyed some properties of the school.

The security personnel were eventually able to bring the situation under control.