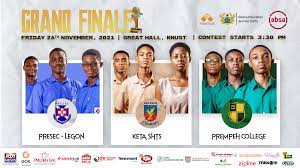 The hottest and most anticipated grand finale of the 2021 NSMQ Championship came to a highly competitive end today, 26th November 2021.

The NSMQ 2021 finals which were held today in Kumasi the Ashanti Regional Capital saw Prempeh College triumph as the winners of the 2021 NSMQ.  Some call it, host and win!

Today’s competition was one of the most competitive as could be witnessed in the close marking of scores from all three contesting schools.

At the end of the round, the scores were so close that the competition was just yet to begin in the second round.

And at the end of the 5th round which also ends the contest the scores were:

In total this will be the 5th time Prempeh College, the Amanfo, will carry the national championship. Their first win was in 1994 which happened to be the first-ever contest of the NSMQ. This means that Prempeh was the first-time winner of the NSMQ trophy.

Their second win was in 1996 where they also came face to face with PRESEC Legon. In 2015 Prempeh College were NSMQ 2015 champions where they faced off with Opoku Ware School and Mfantsipim School.

In total this will be the 2nd time PRESEC Legon, and Prempeh College met at the grand finale of the NMSQ which is a 27-year-old national academic contest between senior high schools across Ghana organized by Primetime Production.

How many schools have won the NSMQ so far?

Winners of the NSMQ over the 27 years of the contest are listed below. As of this year 2021, there are 11 senior high schools that have won the NSMQ since its inception in 1994. Below shows the name of the schools and the years they won the national contest:

How Many Girls' schools have won NSMQ?

Congratulations to all schools making our screens and home lively with spontaneous heartbreaks and WhatsApp groups filled with rivalry.