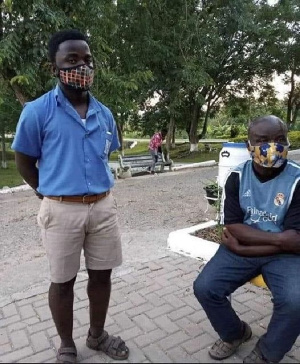 The final year student of Sekondi College in the Western Region who was seen in a viral video insulting President Nana Akufo-Addo after he failed to perform in a paper in the ongoing West African Secondary School Certificate Examination (WASSCE) has apologised to the President.

The boy and his father have been seen in a photo at the school’s premises offering an apology to the President.

The student, whose identity is not immediately known can be seen with his hands at his back in a sober mood while a man believed to be his father looking sad sat beside him.

The Sekondi College student and his friends used unprintable words on the President because of their perception that they were not favoured in the ongoing WASSCE examinations.

The students are not alone as students of Tweneboah Kodua Senior High School (SHS) and Juaben SHS in the Ashanti Region were all seen in various videos vandalising school properties to protest their disappointment at the WASSCE.

Students of Tweneboah Kodua have since apologised for disgracing the school and their parents.

Authorities at the Ghana Education Service (GES) have since condemned the actions of the students demanding that those caught engaging in such acts be dismissed.

It is believed that the student due to the fear of being dismissed decided to offer the unalloyed apology to the President.

Watch the video below