Swedru Secondary School gets new Board of Governors 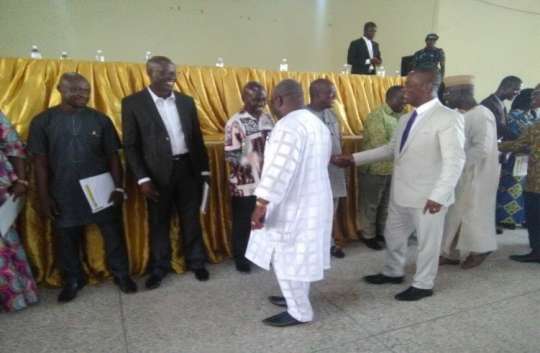 A reconstituted 14-member Board of Governors of the Swedru Secondary School (SWESCO) has been inaugurated with a call on the Ghana Education Service (GES) not to allow boards to over stay their term of office.

The Board, which is yet to elect its chairman, was sworn-in by Mr Isaac Apeatu, Judge of the Agona Swedru Magistrate’s Court.

Mr Bernard Joe Appeah, the Outgoing Chairman of the Board, said it was regrettable that majority of boards of senior high schools (SHS) had over-stayed the tenure of their office.

The trend, he noted, was seriously affecting academic, infrastructure and financial development of schools, adding that the main objective of such boards was to ensure academic excellence and good moral upbringing of the entire students.

Mr Appeah, a Management Consultant, noted that discipline was key to improving academic standards and that academic excellence should continue to be the hall mark of the School.

He said the introduction of the Free Senior High School had given equal opportunity for the youth to pursue secondary education and urged students to concentrate on their books.

Touching on the achievement of his team during his tenure, Mr Appeah, who is an Old Boy of the School, said the Assembly Hall was completed under his tenure and assisted in the acquisition of an 80-acre land for expansion works.

He urged the new Board to work hard to win financial support for the School and ensure it was upgraded to a Grade “A” level to improve on its academic laurels.

A five-year development Plan put together by the old Board was presented to the new one to use it to propel the management of the School.

Mrs Elizabeth Wyns Dogbe, the Managing Director of State Insurance Company, on behalf of the new Board, assured the Management that members would build on the work of their predecessors to make SWESCO one of the best in the country.

They would team up with the School’s Management and Old Students Association to ensure infrastructure development and academic excellence, she said