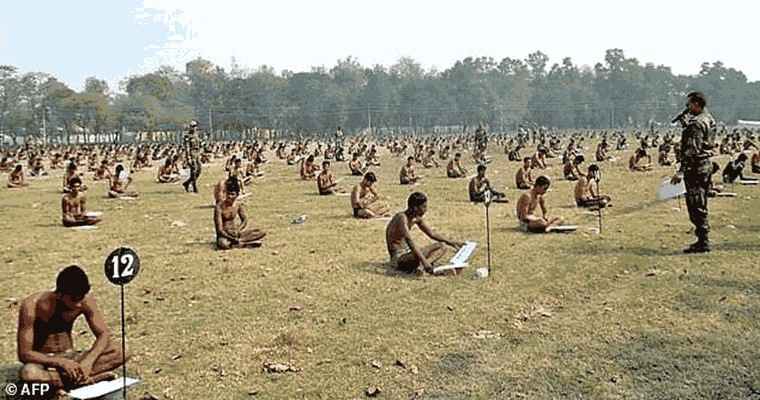 India's Bihar state is notorious for exam cheating. In February 2016 army candidates sat in their underwear to take a written exam during a recruitment day in Muzaffarpur

An Indian college has been banned from conducting examinations after it cut off the sleeves of women candidates for nursing tests to prevent cheating, officials said Monday.

Video shown on Indian TV showed staff at the school using scissors and razor blades to slash the women's sleeves before allowing them into the exam The act sparked protests outside other exam centres and a torrent of complaints on social media.building on Sunday.

Many of the women can be seen carrying the ripped-off sleeves into the exam hall as dozens of police stand guard outside in the Muzaffarpur district of Bihar state.

The act sparked protests outside other exam centres and a torrent of complaints on social media.

District education officer Lalan Prasad Singh said the sleeves were cut to protect the candidates but added that a probe has been launched to find who was responsible.

"The school has been barred from holding exams," he told reporters when confronted over the outcry.

The eastern state is notorious for exam trickery and reports of mass cheating regularly make headlines.

Nearly 1,000 students were expelled by the Bihar state government in February for cheating in school exams.

In February 2016 army candidates sat in their underwear to take a written exam during a recruitment day in Muzaffarpur.

Authorities have already barred students from wearing shoes in exams, to make it more difficult to smuggle in paper.

In the past hundreds of parents have been arrested for helping their offspring. Some used ladders to pass notes with answers to questions into exam halls.

In 2016 three top high school students were arrested after they failed on television to answer simple questions in a subject which they had already passed.

An investigation found they had paid bribes to cheat in the exams.

Other states also have a problem. One woman candidate for a medical college exam in Kerala claimed last year she was forced to take off her bra before entering an exam hall.