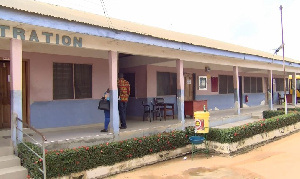 The Ghana Education Service has asked Assistant Headmaster of the Ejisu Secondary Technical School to step aside from official duties.

This comes after he locked two students in his office overnight for supposedly stealing a stabiliser, resulting in one of them attempting suicide.

The GES has also initiated processes to haul assistant headmaster, Kofi Appiah, before a disciplinary committee.

According to school authorities, a taxi driver who caught the students allegedly climbing over the school wall with a bag containing an electric stabiliser handed them over to the assistant headmaster on the night of Tuesday, July 21, 2020.

Kofi Appiah told Luv FM’s Erastus Asare Donkor in an interview that he locked the two in his office after asking them to strip naked because they were not being truthful and he didn’t want to take any decision without the management of the school.

“They were not telling me the truth. It was late in the night and school management were not around. Headmistress too wasn’t around so I did not want to take any decision outside them so I decided to keep them in my office so that the following morning (Wednesday), when the head and other members come, we sit on it and trash the issue,” he said.

But the victim who also told Luv News he was saddened by the fact that he was disgraced for a crime he didn’t commit, revealed that tried to end his life by drinking liquid soap whilst he was locked up with his colleague in the office.

Hafiz who is receiving treatment at the Ejisu Government Hospital said his colleague found the gadget on the school compound and asked him to help carry it to school authorities to look for the owner.

Mr Appiah, who has been stripped of his position was first arrested and held in cells over what police describe as an illegal and condemnable act.