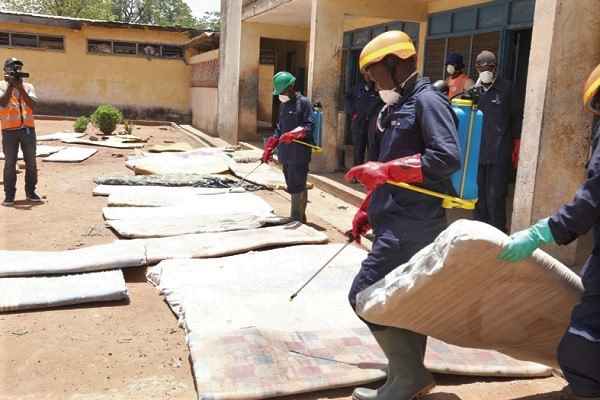 The General Manager of Waste Masters and Agro Ghana Limited, a subsidiary of Jospong Group of Companies, Mr Edmund Kweku Vidjah, has said the chemical used against bedbugs in the country’s secondary schools is ‘very potent.’

According to him, schools being disinfested of bedbugs would attest to the potency of the chemical when they reopened.

He said the chemical was one that had the approval of the Food and Drugs Authority (FDA) and the Ministry of Education for the national disinfestation exercise in SHSs across the country.

Mr Vidjah, who is in charge of the disinfection exercise against bedbugs in public senior high schools (SHSs) in the North East Region, made the observation when Zoomlion began a four-day disinfestation exercise in the region.

The GM of Waste Masters and Agro Ghana Limited described the exercise carried out so far by his team of sprayers as “very successful.”

“We have enjoyed the full cooperation of the school authorities which has facilitated the pace of our work. In fact, the school heads have been very helpful,” he said.

He went on to aver that the exercise would particularly help ease the pains of students, looking at the harm done to them by the bedbugs.

About 12 SHSs were expected to be disinfested in the region.

Meanwhile, speaking to a cross-section of journalists after the exercise in his school, the Assistant Headmaster in charge of Administration, Nalerigu SHS, Ali Nantomah, was full of praise for the government and Zoomlion.

According to him, the school had been battling with bedbugs over the years, a situation he said resulted in students sleeping outside their dormitories.

“To make matters worse, many of my students could not even have the peace of mind to do any meaningful academic work,” he bemoaned.

“That is why our school is very grateful to the government and Zoomlion for this initiative. Indeed, it will go a long way to ease our burden of using our scarce resources to spray the school, and further give the students the peace of mind to study,” Mr Nantomah said.

The exercise is a collaboration between Zoomlion Ghana Limited, Ministry of Education and the Ghana Education Service.

Already, the exercise has been undertaken in the Eastern, Ashanti and Volta regions.